BLOG
All
All
Company
Future of Work
Product
Time Management
How to improve remote & hybrid team dynamics
How to schedule Slack messages with ease
How to spend less time in meetings
Agile vs Waterfall: Development methodology cage match
12 best team management apps for 2022
Calendly alternatives & competitors for 2022
3 steps to a color coded calendar
How to sync work and personal calendars
Zoom calendar integration made simple
How to supercharge your next one-on-one
5 focus apps to stop distractions
Time blocking 101: Your guide to getting started
How to run more efficient, effective, and engaging meetings
The 3 best Pomodoro timer apps for 2022
How to schedule a meeting in Slack
Meet Dominic Mazzoni, Eng Foundation Software Engineer
Online calendar software tools for management and scheduling
The best appointment scheduling apps for 2022
You're Invited! Join us for Clockwise Office Hours.
How to Add Asana to Slack
7 tips for a smooth new customer onboarding process
Meet Dan Kador, our new VP of Engineering
The best Asana integrations for productivity
Meet Anna Dearmon Kornick, our new Head of Community
5 best books about focus for 2022
How to quickly hire an amazing freelance Software Developer
Capacity planning strategies for software development teams
The Product Backlog: Your Product Owner's to-do list
Sprint retrospective meeting ideas for remote teams
Meet Kevin Nothnagel, VP of Sales at Clockwise
How to use Asana for project management
Productivity guru Paul Minors on the past, present, and future of calendaring
The how to leverage asynchronous communication for team success
Agile vs. DevOps
Clockwise Engineering’s amazing PERKs
How to ace hybrid Zoom meetings
Are you ready for the future of work? Hybrid work demystified
33 companies going permanently remote
Tips for awesome Slack project management and team collaboration
4 new features to help you tackle your to-do list!
How to create and share a Google calendar with your team
12 tips for getting (and staying) motivated at work
7 tested time management tips for Project Managers
Slack integrations to complement your productivity style
The 6 best agile tools for project management
How to make weekly team meetings more effective, engaging, and enjoyable (really!)
How to run an awesome Scrum meeting
How to quickly sync your calendar with Google Assistant
Clockwise is now available for Firefox and Safari!
How to conquer meeting schedule conflicts
Your step-by-step guide to running a Sprint Planning meeting effectively
The Scrum Team’s guide to Sprint Planning
How to be productive: 25 tips to live by
Everything you need to know about release planning in Agile
These availability calendar apps will simplify your scheduling process
Why your project roadmap isn’t just another project plan
Comparing the best project management software of 2022
Clockwise makes it easier than ever to split your working hours
Scrumban guide: 9 things to know before you start
6 best calendar apps in 2022 compared
10 best team chat/communication apps in 2022
11 best focus apps in 2022
10 best remote desktop software in 2022
5 awesome timeboxing apps compared
Your complete software project management guide
How to manage a Software Development team: What your devs won’t tell you
Why Clockwise celebrates PRIDE
Why Juneteenth matters
The ideal remote work policy and agreement: A guide for companies
Zoom team building: 25 activities that are actually fun
The ecstasy and agony of measuring productivity for Software Engineering & Development
Using the Pomodoro technique to achieve productivity superstardom
5 great side hustles for Software Engineers
The remote worker’s guide to preventing Zoom fatigue
How to quickly change your Slack status to away or busy
How to be productive: 7 can’t-miss methods
What is timeboxing and why do I need to start doing it today?
9 tips for increasing team productivity
Deep Work summary & concept guide
3 best practices for cross-functional team collaboration
5 can’t-miss remote onboarding best practices
5 types of meetings that are worth the time
How to use the Eisenhower Matrix for productivity and time management
How to use time batching for productivity
Project kickoff meetings: Your guide to success
Managing a remote team: Tips and best practices
How to integrate Zoom with Google Calendar
Teams vs. Zoom: Pros, cons, and what's best
Teams vs. Slack: Pros, cons, and what's best
How to build and structure a successful Engineering team
Working remotely: The pros and cons
A look at the daily routine of a Software Developer
Work from home routine for focus and productivity
Go vs. Rust performance comparison: The basics
The 5 best time management apps for Software Developers
How and where to hire Software Developers
Must-read software engineering books
Top 3 time management books
5 tips for time management in software development
The best time management tips for teams 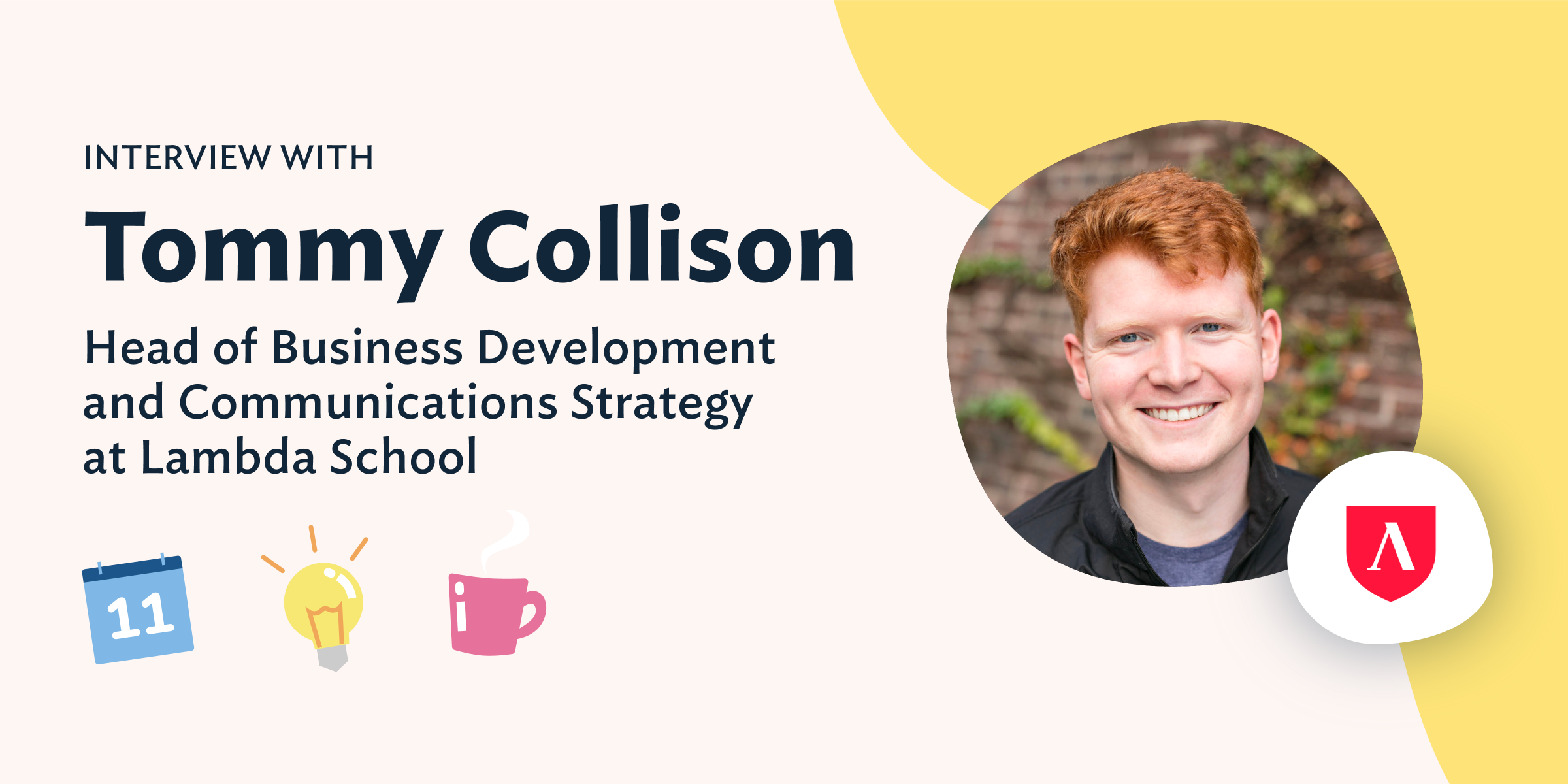 Tommy Collison is Head of Business Development and Communications Strategy at Lambda School, an online coding academy and job training program that doesn’t charge tuition until its graduates are hired. We sat down with Tommy to talk about what managers should know about hiring software engineers without a four-year CS degree or other traditional credentials. We talked about the benefits of non-traditional candidates and how to hire well and onboard quickly.

“My older brother never did CS in school,” Tommy told me. “He was coding from the age of like 11 or 12.” When considering non-traditional candidates, employers may focus too much on “lagging indicators of ability.”

That older brother is Patrick Collison, Irish billionaire entrepreneur, and co-founder and CEO of Stripe.

Tommy wants hiring managers to know there are a ton of talented software engineering candidates who have their “10,000 hours” of coding experience, but don’t have a bachelor’s degree in Computer Science. Many employers are overlooking these candidates to their detriment.

“Different industries are differently organized,” Tommy said. “You can be the best lawyer in the world, but if you haven't passed the bar, you're going to have a pretty significant uphill struggle.” He says coding is well-suited to online programs like Lambda School. But, not just Lambda School. “There’s Udemy, there's YouTube. There's so many different ways you can learn to code. You don't actually need credentials. It’s very meritocratic, for want of a better word. If you can write React, you can write React. Employers should recognize that and realize that the pool that they can pull from is much bigger than they might otherwise think.”

Not only is that pool bigger, but it also has its own unique advantages. For example, as the average student is in their 30s, many students enter Lambda School with industry experience. They’re not there to launch their careers, but to learn new skills and increase their salary.

“Whether you come from restaurants or whatever, a lot of students go and get a job in the industry they were in, but now as a coder or a data scientist,” Tommy said.

Tommy says hiring managers love it when new hires already know the industry. A Lambda School graduate with healthcare experience, for instance, will onboard in health tech more quickly than someone fresh out of a CS program without that industry experience. “The on-ramp is much, much less,” Tommy said. “It's much easier for them to integrate into the team because they have background.”

Tommy wants hiring managers to overcome any biases they might have about candidates with non-traditional or underrepresented backgrounds. He says his colleagues speak to many hiring managers who resist speaking with Lambda School because they had a bad experience with a bootcamp grad.

The candidate may be a poor fit. But don’t refuse a whole category of candidates out-of-hand. “I’m not negating your bad experience, but not all bootcamps are created equal,” Tommy said.

How to successfully hire and onboard a non-traditional coder

Speaking of evaluating bootcamps and coding academies, we wanted to know what criteria hiring managers should use to evaluate training programs.

“I think the big thing is hours spent coding,” Tommy said. The syllabus is also obviously important. “But the concern I have when people write Lambda School off as a bootcamp is that the school is twice as long as many other boot camps our students spend between 750 and 1000 hours hands-to-keyboard, actually writing code. And that delta in time spent coding I think is really, really valuable.”

Another thing to look at, according to Tommy, are the candidate’s portfolio pieces and projects. This is “the highest value signal a lot of the time,” Tommy said. He says this is “part of a larger conversation about how terrible whiteboard interviews are, and how hard it is to interview people.”

Lambda School emphasizes student portfolios. “90% of the projects at Lambda School are solo projects,” Tommy said. “You have to be there with your code and your keyboard, and you have to learn how to do this. And we do have a bunch of group technical projects. They are designed to be as close to a real working relationship as we can get, in the sense of you have someone you're reporting to, you've got deadlines, you've got a timeframe, a spec list, wireframes, mock-ups. Those are portfolio pieces that the students can then turn around and use to help them get a job.”

Take-home technical assignments are another fairly good measure of whether a candidate can do what you want them to do.

After that, it’s about communication skills and industry knowledge. “Once you're down to the last two or three people, they're probably all going to have the technical chops and they'll all make you a React app to the same standard,” Tommy said.

But the hiring manager corrected them. The final two or three candidates all had the technical chops. “Our guy who had gone through language school and who had his PhD was just much better at communicating his ideas and why he wrote the code this way and communicating with the team,” Tommy said. “That's what made him stand out and that's what got him the job.”

Connecting with Tommy and Lambda School

Next up for Lambda School is a yet-to-be-launched Lambda Fellowship, where a graduate in good standing works at a company for four weeks on a spec project. Should the company decide to move forward with the graduate, they have first shot at hiring them. If the company or the student doesn’t want to continue working together, Lambda School covers the cost of their salary for a month. “It’s like a one-month free trial of an engineer that just slots into your dev shop,” Tommy said. “It's a scoped-out project that we work out with you. We pay the fellow for the first four weeks. We'll cover the cost if you decline to move forward with them. If you hire the fellow, you should pay us back. But otherwise, you're good.”

Tommy said the origins of the Fellowship was how difficult it is “to get a sense of who people are out of a resume,” Tommy said. “It's really just a question of, this is a React job. Can this person write React? It's pretty hard to fake. So, ‘Show me what you can do,’ seems to be what we're hearing from hiring managers day in and day out.”

I asked Tommy what else he might want people to know about hiring non-traditional candidates and Lambda School grads in particular. “Every interview I do, I get the question: ‘What's Lambda’s finder’s fee?’ Tommy said. “And I'm like, ‘We don't have one.’ That does seem to be just super unusual.”

One on one meeting: How to make them effective

by
Alex Moser
in
Time Management 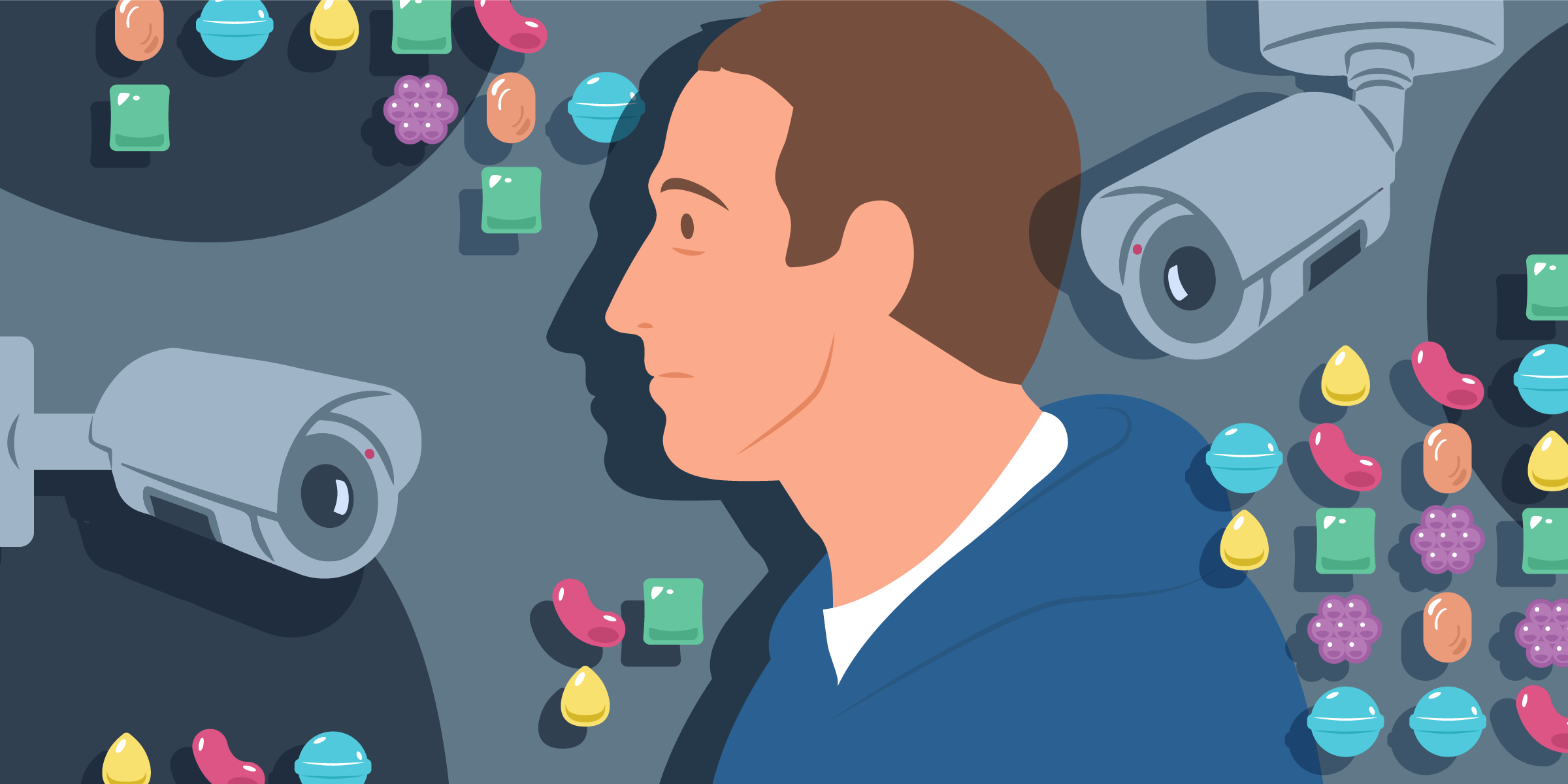 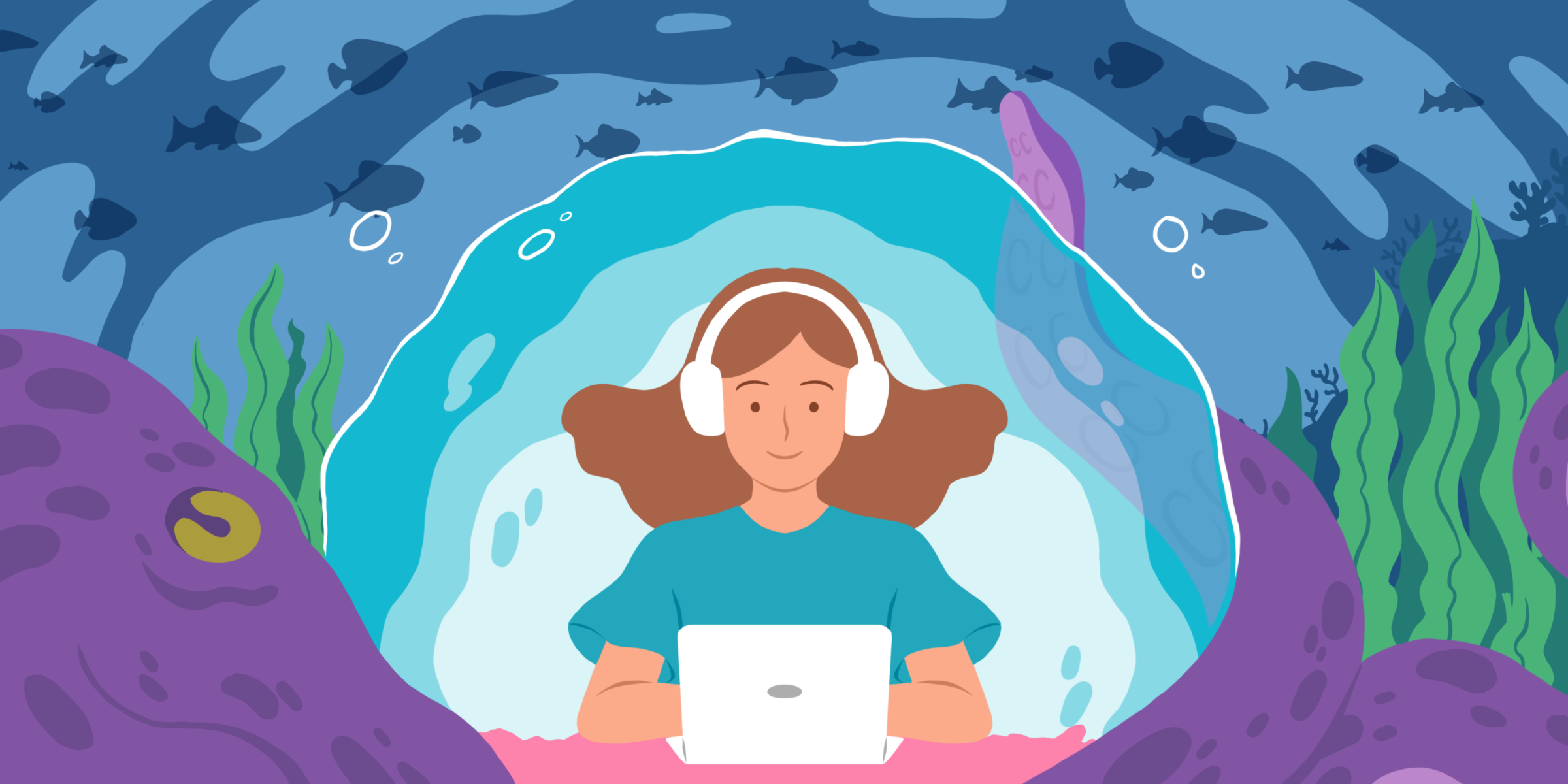