"Engineers have seen an improvement in heads-down time and ability to get work done, which of course is productivity and ultimately business impact. That's been a huge help."
- Abbie Kouzmanoff
Senior Product Manager at Amplitude 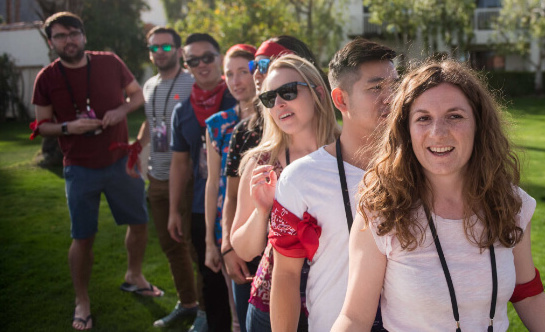 Shepherding Product at the world’s most popular Product Intelligence platform requires a ton of meetings. It also requires heads-down time for strategy and planning. Shintaro Matsui is the Head of Product Operations at Amplitude and Abbie Kouzmanoff is a Senior Product Manager. Shintaro and Abbie use Clockwise to automate their schedules, find time for focus, and get more done than ever before.

Too many meetings, too little time to focus

Building and strengthening relationships “is a really important, and really enjoyable, part of my job,” Abbie said. Shintaro and Abbie work cross-functionally across Engineering, Design, Marketing, Customer Success, and Sales. “The not-enjoyable part is managing those meetings,” Abbie said. “I often joke to people who want to become a PM, ‘Do you like scheduling meetings? Because that is a big part of it.’”

In addition to copious meetings, Shintaro deals with constant interruptions and ad hoc requests that make it difficult to plan.

Plus, Amplitude is growing and scaling. Before the end of the year, Abbie and Shintaro plan to grow their respective teams. “As we scale, we're trying to work together more across Product teams and build towards more of a shared vision, which was much easier when we were smaller,” Abbie said.

“Just making sure everyone's on the same page is a challenge,” Shintaro said.

“It takes something off of your plate which can be really time-intensive and not necessarily high-leverage.”
-Shintaro Matsui, Head of Product Operations at Amplitude

Handing off scheduling and rescheduling to Clockwise

One day, Abbie’s Engineering Manager counterpart asked if they could get the whole team using Clockwise. The first thing that drew Abbie in was that Clockwise could automatically resolve conflicts. She knew it would save her tons of time.

Before Clockwise, Abbie had to check to be sure every new meeting wasn’t scheduled over something else. “It’s peace-of-mind,” Abbie said. “One less thing to worry about.”

“It takes something off of your plate which can be really time-intensive and not necessarily high-leverage,” Shintaro said.

Once most of Engineering and Product was on Clockwise, it began to spread throughout the company.

“It also takes something collectively off the plate of the team,” Abbie said. “It has compounding effects. You'll start to see benefits across the team, and more happiness.”

Shintaro discovered Clockwise through Abbie when he joined. For him, Focus Time was the big draw. “Time where you're able to be heads-down as opposed to being interrupted has been super helpful for myself and my team.”

“Especially in the pandemic, having more long periods of time where I'm not on Zoom is also a relief,” Abbie said. “Knowing there's those blocks versus little 15-minute chunks.”

Getting more done than ever with Clockwise

Clockwise has enabled Shintaro to drive business outcomes like a new weekly metrics report for cross-functional leadership decision-making. Amplitude also implemented a documentation repository, product newsletter, and formalized annual planning process. “Those are things that you can't do in half-hour spurts, so it's really helpful to have that longer focus time,” Shintaro said.

“As a PM, you're always like, ‘How do I get more time to focus on strategy?” Abbie said.

Abbie’s used her Focus Time to revamp core reporting tools, dashboards, and notebooks. Today analysts, PMs, and others can embed reports in other tools to more easily share learnings with their teams.

“Engineers have seen an improvement in heads-down time and ability to actually get work done, which of course is productivity and ultimately business impact. You can improve the speed at which you're also developing new features just by getting time back that was not being used effectively,” Abbie said. “That's been a huge help.”

Shintaro and Abbie appreciate Clockwise’s Friday week-in-review email. “Most PMs are data-driven,” Shintaro said. “It's easy to get stuck in this pattern of meetings. Clockwise gives you visibility. When you see how much time you're spending in meetings every week, it forces you to be critical. Is it high-leverage time?”

“Since adopting Clockwise, Engineering leadership has talked about Einstein Time,” Abbie said. “They were asking people to go through their one-on-ones and remove things. I never saw that happening before Clockwise. At a team level, it's helpful. But also at an org level, the conversations it inspires are really positive. They take away some of the awkwardness of canceling meetings. That has definitely been a productivity increase for our team.”