Advice from Tim Olshansky, EVP of Product and Engineering at Zenput, for Engineers to better manage their careers while working remote for COVID 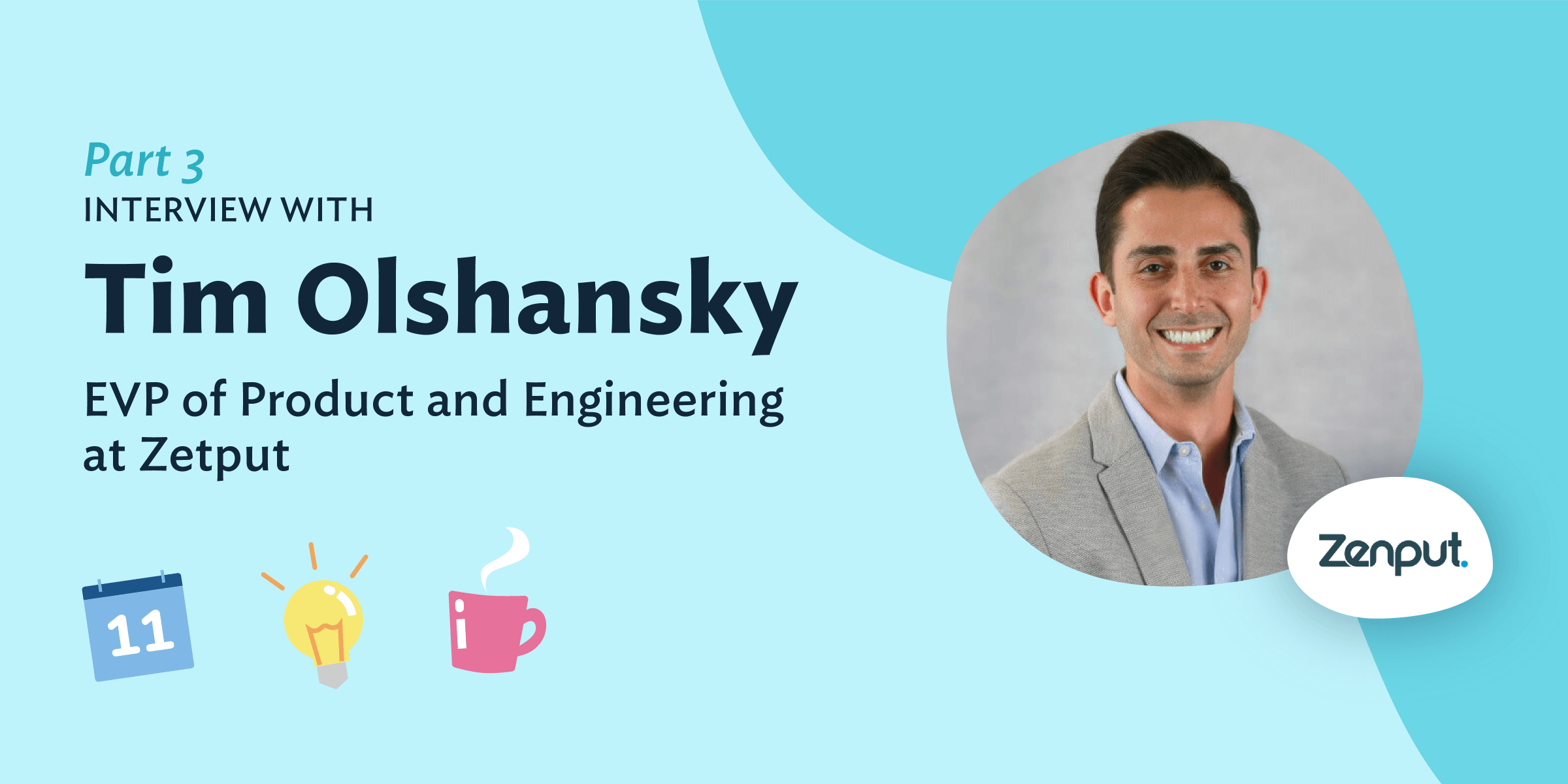 We recently spoke with Tim Olshansky, EVP of Product and Engineering at Zenput, about how he’s finding work/life balance and the tools the Engineering and Product teams have adopted to help collaborate during COVID.

We also talked about how remote work can make it harder for leadership to know which Engineers are engaged and productive. Olshansky offered three tried-and-true tips for helping Engineers accelerate their professional growth.

“I think the challenge with a remote work environment is [there’s] less visibility from the next level of management,” Tim said. Obviously, it’s important for your direct manager to know what you’re doing. “If your manager has no idea what you're doing already, that's already a pretty big red flag,” Olshansky admitted with a laugh. This is obviously harder over distance. So tips like sending your boss a weekly ‘state of me’ email with what you’re working on, anything relevant going on in your life, any blockers, etc. can be extra helpful.”

Tim noted that even when your manager has a good idea of what you’re working on, their manager still might not. The challenge with WFH is that your manager's manager may not have the same level of visibility into what you're doing that they might have had previously in an office environment. “That might not be a reflection of you,” Olshansky said. “It might be the fact that your manager is not in the office with their manager and is not communicating everything that's going on.”

How to be more visible

Tim recommends three tips for making sure your work and contributions stay visible even over distance.

To help ensure your boss’s boss knows what you’re doing, Olshansky recommends communicating in a more public fashion, “for lack of a better term.”

By “communicating in a more public fashion,” Olshansky doesn’t mean “just chatting like crazy on Slack or anything like that. Although, I personally don't mind it. Actually, I love seeing lots of activity and active discussions on meaningful things as well as fun things in different channels.”

It’s more about raising your hand when there’s an opportunity to publicly contribute. For example, if there is a big technical problem that a lot of people are getting together to discuss, Olshansky recommends volunteering to type up notes and share them with the team after the meeting. In other words, “Being the person that may not necessarily be coming up with all the answers, but at least taking initiative around communicating more,” Olshansky said. “Taking the lead and communicating things that you may not have done previously and being a bit more vocal about whatever happens to be going on.”

When people have stepped up in these kinds of ways it’s made a big positive impression on Olshansky.

2. Show up with solutions

No manager is going to be short on problems, especially during COVID. You should always proactively communicate your challenges and roadblocks to your manager. But to stand out, and make their lives easier, Olshansky recommends showing up with potential solutions as well.

“So, if you have problems that need to be fixed, maybe by virtue of the fact that you are remote, and it's not working as well as it might have been if you were in an office, it's okay to bring up those problems,” Olshansky said. “But bring them with a proposal as well.”

For example, if you tell your manager what’s going wrong, also offer two potential solutions and ask for feedback. The ideas don’t have to be winners, even. Just coming up with something at all shows you’re proactive and solutions oriented, and might save them some time. After all, it’s generally easier to react to even a bad proposal than to think up something entirely new out of the blue.

“The last thing I found that has been very helpful to a few folks on the team here is taking steps to create some more social connection,” Olshansky said. A full 75% of workers say they’ve become more socially isolated, and nearly a third of employees have had zero informal contact with their team, since the start of the pandemic. A support network can help workers thrive during trauma and improve our ability to respond to stress. Socially isolated workers are 19% more likely to report declining mental health.

“That doesn't have to be that kind of awkward team-building activity that I'm sure many have done over Zoom, where you’re questioning why you're bothering because it's not that fun anyway.” There are lots of ways to connect over distance that aren’t cringy. At Clockwise we connect over something that isn’t work on Tuesday evenings, often trivia, Drawful, or other online games. Employees’ kids are invited as well. Both Zenput and Clockwise also recently implemented Donut, a Slack app that pairs employees randomly to chat socially.

Another way to connect is to just try to create a more social environment in your meetings. Try to be the one with a fun story or fact to get the conversation going before meetings get started. “Every company has its own weird quirks, but we have a lot of banter, if that translates, in meetings,” Olshansky said. “I'm a big fan, because I think it helps diffuse and set the stage for people to sort of relax, not feel like they're constantly in work mode and they have to be really switched on and can't have fun at the same time.”

If you missed Tim on finding work/life balance and the tools the Engineering and Product teams have adopted to help collaborate during COVID, go ahead and check those out. 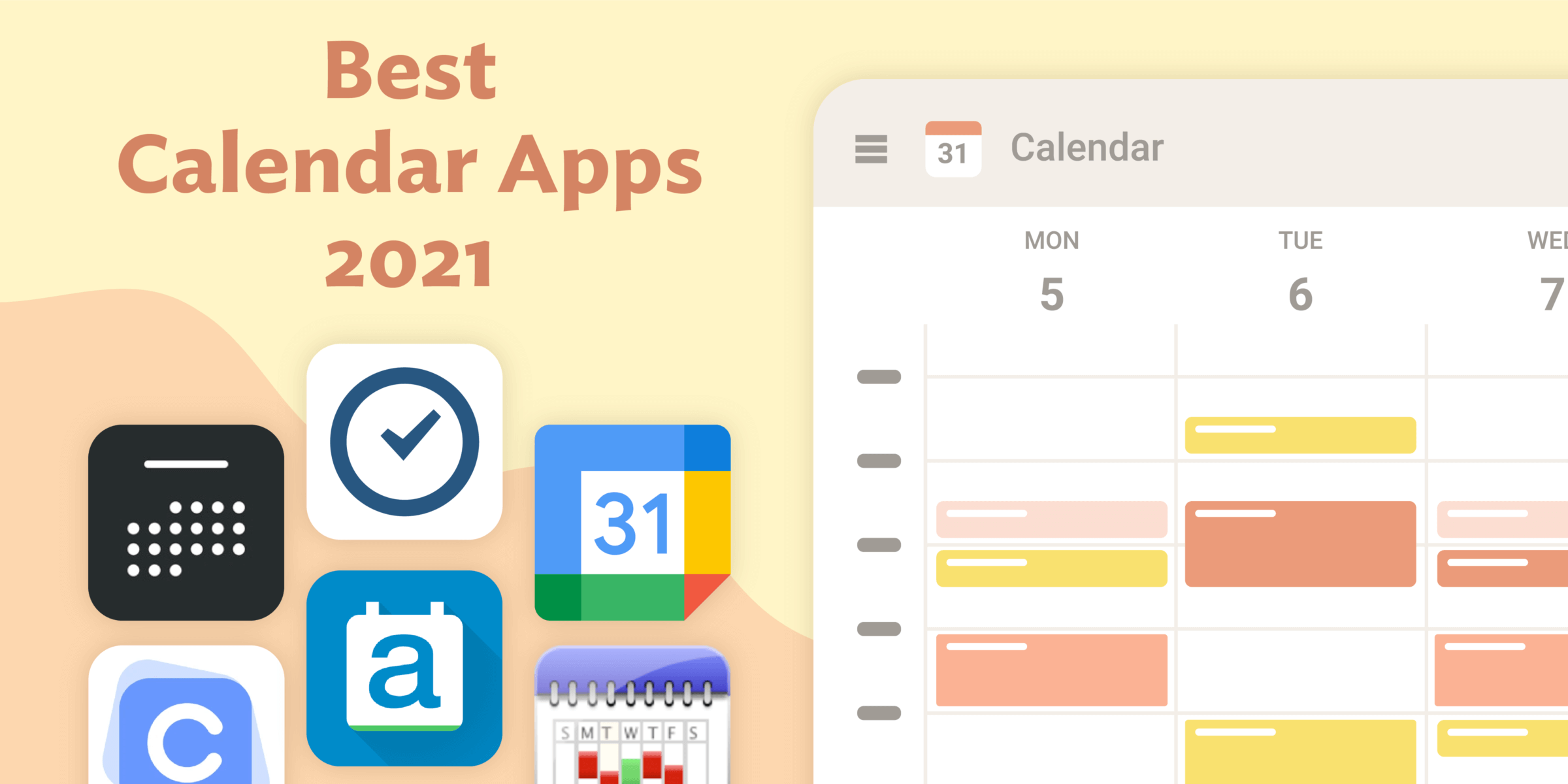 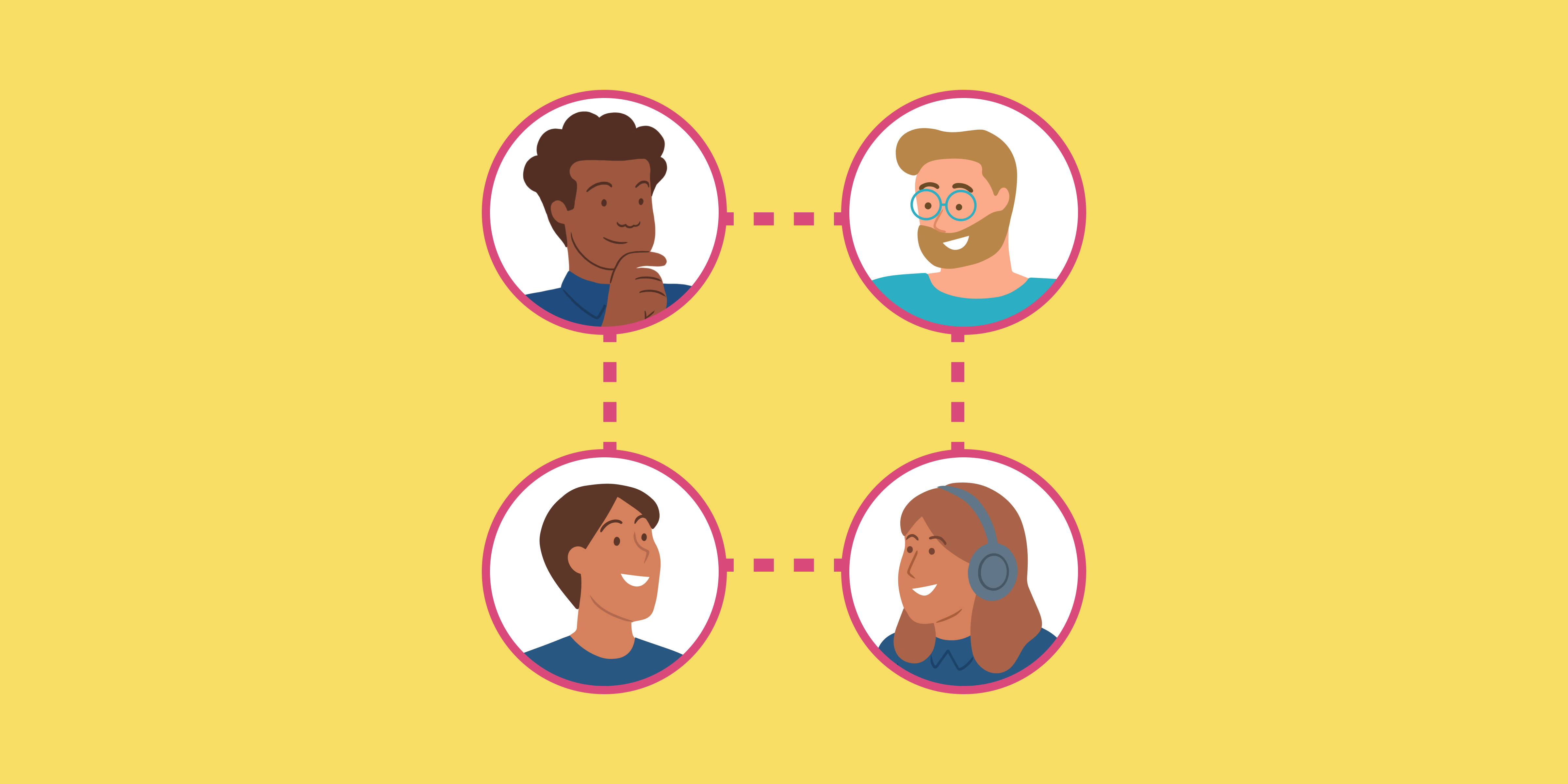 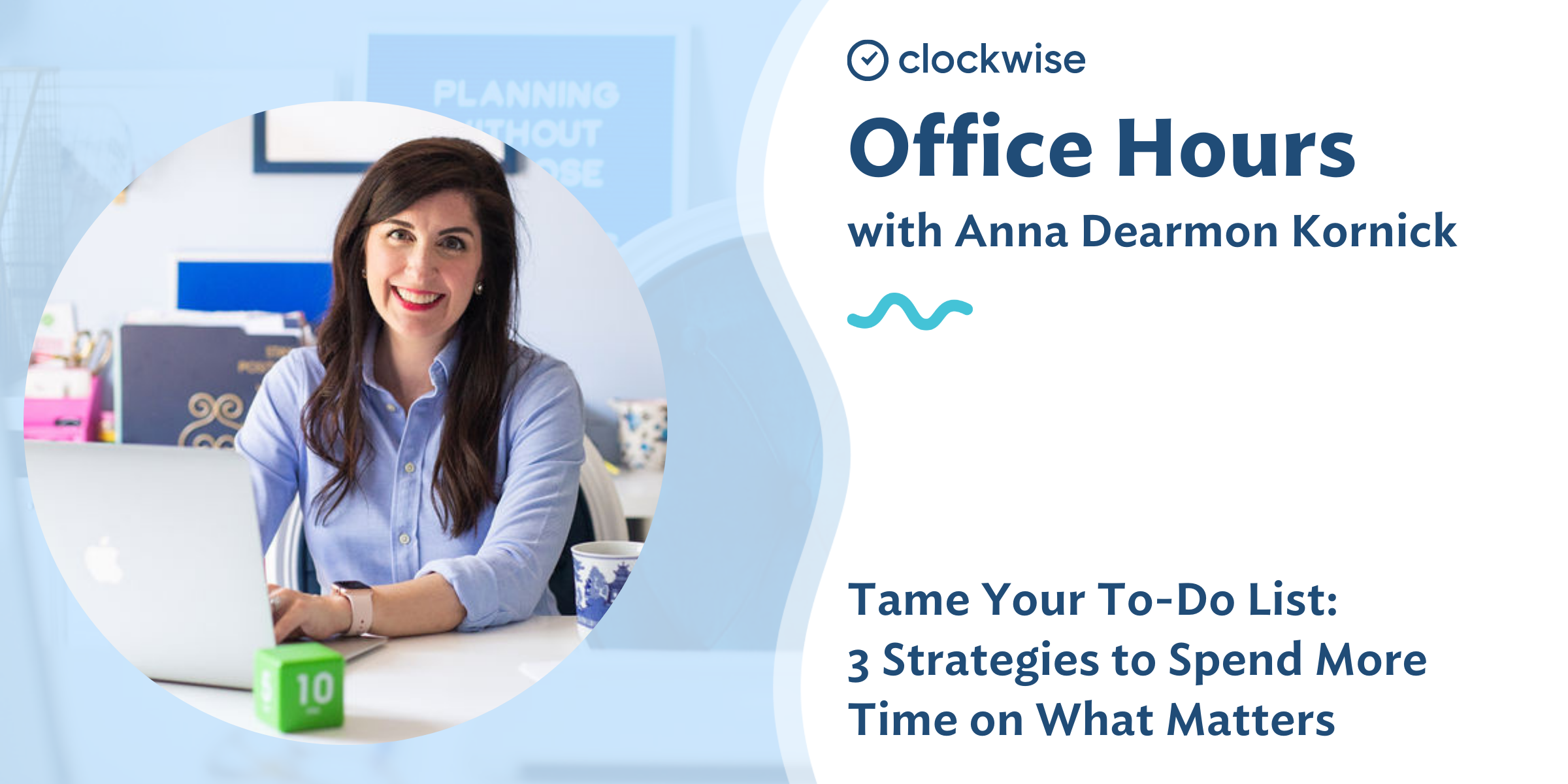 3 Strategies to Spend More Time on What Matters

One on one meeting: How to make them effective